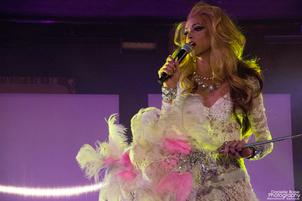 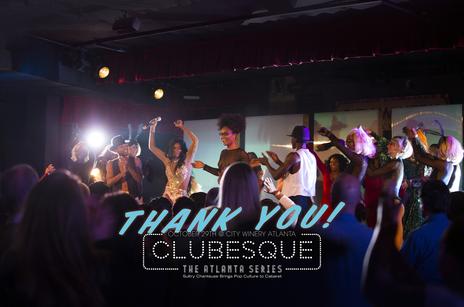 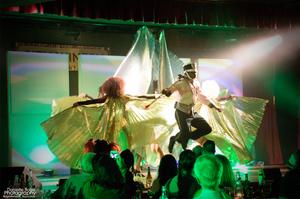 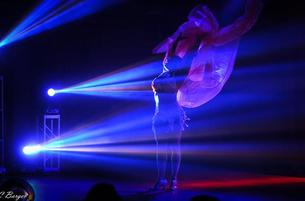 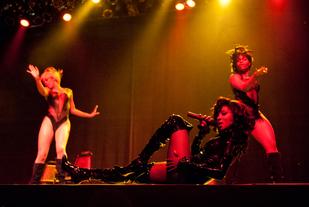 Entertainer, vocalist and producer Stephens introduced this concept of interactive theater to Atlanta in July 2014 at Center Stage to a thunderous applause. Utilizing the best talent in the business and applying none of the traditional rules of concert or theater behavior made this experience an instant success. The live interactive show was an interplay of different genres of entertainment linked together to celebrate the beauty, personality, and soul of today's modern woman. The 90-minute performance at Center Stage featured world renowned talent from every section of the entertainment industry. Each artist incorporated their genre of dance, singing and music enabling the show to remain consistently authentic. The show began the moment you walked through the doors, as each person from every walk of life assembled under one roof. Greeted by the " Showgirls of Clubesque", each party was escorted to their table after stopping at the photo booth, and given their pre-show drink, Clubesque party pack and sometimes a kiss. DJ Mello Dope continued pre-show activities including crowd karaoke, dancing contests, and line dances, which quickly became a crowd favorite.

The opening set the tone of the show as the crowd was introduced to the concept of Clubesque by Kyle Collins, Emcee. Stars, Sunni Stephens, Lisa Denise, and Kayte Burgess made their grand entrances to the tunes of Diamonds as a Girls Best Friend, Big Spender, and Too Darn Hot introducing their characters to the crowd. The "Ladies of Clubesque" the core dance team for the production flipped, pirouette, and chasse connecting each musical number which always ended with a standing ovation. The next two acts immersed the crowd into the Hollywood Glamour and cabarets of the 30s, 40s, and 50s. Set to the music of yesterday-year, crowd favorites were Heidi Ho as made famous by Cab Calloway, Whatever Lola Wants, and Caledonia, the foot stomping, hand clapping up tempo version that celebrated the juke joints of the 30s.

Peeling away at the layers of cabaret and burlesque, Sunni and team were able to transition to the naughty side of cabaret as their rendition of the dance styles of Josephine Baker, performed by Perle Noire. Noire "Mahogany Queen of Burlesque" and one of the top 3 performers in the world, performed her rendition banana routine complemented by live percussionist, Yemi Conga (African percussionist) which always got the audience off their feet. Other highlights included the show stopping routine “Be Italian”  performed by The Atlanta School of Burlesque; Marilyn Chen and Liquid Skye Entertainment high energy aerial routine set to a mashup of EDM and Rock music; Lisa Denise's rendition of “I Will Always Love You”; Kayte's SNL inspired skits including the Adam Sandler hit "The Thanksgiving Song"; Nicole Paige Brooks' famous lap dance to "Knock on Wood"; and Sunni Stephens's infamous Candy Apple Red routine had guys giving themselves high fives if they were chosen to participate.  Last but not least, the closing EDM set where the show turned into a 15 minute EDM, flash mob/Zumba party hosted and led by Sunni Stephens and Mello Dope.

What became evident as you partook in this joy-ride was the wave of emotions the performers rode throughout the show. The crowd sang along, danced, cried, laughed, and felt as sexy as the cast did. Highlighting the cast’s excellent job of keeping the crowd engaged in every second with their ever-changing costumes, styles of dance, and sets, along with amazing choreography, sex appeal, and energy. The entire cast proved that beauty comes in all colors, sizes, and forms. As they showcased today’s 3-dimensional woman beauty, personality, and soul, Clubesque was what every woman aspired to be and what every man aspired to be with.

Garnering an eclectic group of over 200+ loyal followers, these monthly soirees brought people as far as Australia to experience this new brand of entertainment.  "I am overjoyed we are putting together a new season…” says Stephens. "Now that we have brought the show back to show-business, this season will showcase the evolution of pop culture and its influence on today’s modern-day woman.

Joining Stephens for season two of Clubesque includes a titillating lineup from the worlds of stage, screen, dance and music. Perle Noire and her gems will be gracing our stages along with Nicole Paige Brooks, The Atlanta School of Burlesque, and other surprises are in store for this premiere.

Lush costumes, infectious music, dazzling choreography and a gorgeous cast will continue to tantalize the audiences’ senses leaving them wanting more. "It all adds up to a spectacle...in the best kind of way" .